All of Us (Creation)

It started with darkness

of this I am quite sure.

Then, somehow there was

in order to create

As my younger self in

“Even God (or whatever)

After that, it all mystery.

In School I read a story about Coyote,

With God as a crow,

And how the earth was discovered by duck

diving below the surface of the deep water.

would never approve of such tales.

But, I would say, rather rebelliously,

“How can you put limits on God?”

Time travel is first discovered by Elon Musk and Michael J. Fox collaborating on an attempt to change the speed of light measurement. They find a new dimensional sphere of max capacity motionless micro- nanoseconds at precisely zero temperature within the confines of molecular vibrational structures. This empowers the ‘’time influence” to break familiar ties to the now moment and restructures a particular space in time that allows more precisional influences to intertwine within each of it’s dimensional spheres thus opening the lock to almighty time loop better known as “time kindling”. This is how they are able to travel to specific nanoseconds along the perimeter of what we perceive as “past”. But no such time really existed without the observational element and so they are able to hold a point of light on each micro-nanosecond of time as a perceptional value which is all things, all time, and all space

Humans have evolved the capacity to consume natural resources to benefit themselves. Most often, they do so without regard to long term consequences to the earth. They are driven by an unseen force to consume far beyond what is needed, destroying the natural resources available to them. There are also humans, far fewer in number, who have evolved the capacity to collaborate with the forces of nature; to preserve the natural world and be good stewards, thereby enhancing and preserving the natural order. It is the nature of things that the action and reaction between the opposing forces remain in balance.

Writing is a pleasure,

to anywhere I can imagine,

on the very longest night,

flying glow- in- the- dark kites.

“Use your creativity and intuition”,

“It is your Earthly mission

and it was your own choice.”

Let your thoughts come and go—

don’t stop them, let them flow.

Let your thoughts swirl in your head—

then, with paper and pen,

write down what wants to be said.

We all have our own version of B.S. A Belief System that is.

Whether you’re brought up in a religious family, are scientific minded or consider yourself an atheist, you have a belief system that guides you though your life.

And in all these systems, there is an idea of where we come from. A creation story.

As a child, I was all in on the idea that there was a wise old man (white man of course) who has existed forever somewhere in the clouds . One day, out of the blue he decides to  create days and then use seven of them to create everything else with a little rest at the end. I can only assume it was a spur of the moment idea and not some long planned out scheme – or he would have done a better job with the human part of the plan.

Once upon a time, in the Dreamworld, Human Beings were like children who played and enjoyed the same freedoms of all the other Beings, without the hindrance of accoutrements in a physical world, for instance Love, Death, Pain, Sex, Hunger, Swimming. There was no Time marching on, thus no past nor future, only a spirit connected to every other Being, thus no loneliness; no preferences, thus no hatred; no food needed, thus no searching; no sex, thus no oppression.

It’s difficult to tell those conditioned (some of us would say “imprisoned”) in a physical world about the mythology of how we got Here.

Don’t blame me, maybe I was wrong about some things but no one’s perfect. I’ll let you decide. 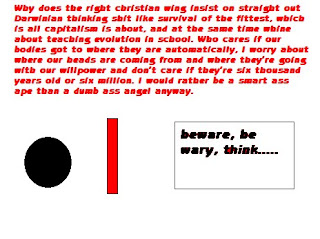